March For A New Europe

March For A New Europe – All Aboard!

On 23 June 2016, the United Kingdom announced its decision to leave the EU. For nationalists and populists, it’s become a day of celebration. But now it’s our turn! We refuse to be silenced on that day of all days. We’re going to speak up loud and clear for our idea of a new Europe!

We stand firm against backwards, nationalist, and fact-denying politics: the kind that’s symbolised by the red bus of the Leave campaign 🇬🇧🚗🚌. We’re putting our foot down. We’ve got bags of concrete proposals that will signpost the way to a democratic, sustainable, supportive Europe!

Our “March for a New Europe” will kick off on 23 June at 11.45 at Friedrichstraße S-Bahn station. When the clocks strike 12 o’clock, we’ll head on towards Bebelplatz, stopping by the British Embassy on the way. We’re turning Bebelplatz into the centre of Europe. There will be pitches from people with visions for Europe, a chance to speed-date politicians, enjoy music, and much, much more...

We want Europe. But wanting Europe today means wanting a different kind of Europe. We want a Europe that is close to its citizens: a democratic Europe that is sustainable and full of solidarity.

Together, we’re making a stand for a European democracy that has its citizens as its heart. It’s finally time for us to get the social Europe we’ve been promised. We want a Europe where social politics secure the freedom of all citizens and makes sure everyone gets an equal shot in life.

Now is the time to take to the streets, raise our voices and make a stand for what we believe in. Will you come along for the ride? 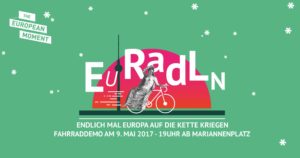 Following the phenomenal success of its first two demos, The European Moment is gearing up for velovolution! 9 May is Europe Day: 67 years since the Schuman Declaration laid the foundation for Europe as we know it. To mark the occasion, we’re saddling up and hitting the streets - on two wheels, this time - in support of deeper and peaceful European cooperation and solidarity. It’s time to slam the brakes on nationalism and populism.

The narrow victory of France’s only explicitly pro-European candidate in the first round of the presidential elections may have sent a sigh of relief all round, but it’s time to take things up a gear. That’s why we’re putting all our efforts - and our calf muscles - into sending nationalist and populist politics spiralling into oblivion. Now is not the time for freewheeling - they are hot on our wheels.

We call this initial electoral success a European moment: a chink of light that has lit up the path to a pro-European perspective, a path we are not only lining with concrete political demands, but one which is absolutely a public right of way.

So, in case you haven’t already taken advantage of the first few rays of sun this year, it’s time to oil your chain and pump up your tyres, ready to join us at 7pm at Mariannenplatz in Berlin. Don’t worry - we’ll have everything you need to pimp your ride and transform it into a lean, mean, pro-European machine. The best-dressed bike wins a prize! No matter if you’ve got the latest Italian racing bike, a sturdy mountain bike, or just your nan’s old pile of rust, roll on by and join the fun!

The European Moment’s checklist for the bike demo:

Enthusiastic pro-Europeans looking to protest
A more or less passable bike
9 May 2017, 7pm, Mariannenplatz
Invite all your friends to our Tour d’Europe
Check out the German Highway Code

Love from,
The European Moment

On 25 March 2017, 6000 of us made our mark on the streets of Berlin. We spoke up for what we want: more Europe – not less! OK, we’re a tad late, but now it’s time to save Europe! But Europe is a marathon, not a sprint…and this year it’s a hurdle race. The next hurdle to scale on the way to a humanitarian, future-oriented Europe: the French presidential elections. The fight for deeper European cooperation and our protest against nationalism and right-wing populism: it’s all just beginning. Europe won’t save itself - a fairer, more democratic Europe with more solidarity relies on each and every person in Europe standing up for it… We can only achieve this together. The more, the merrier!

On Saturday 29 April 2017, it’ll be time for our movement to take the next step: together with hundreds of other pro-European citizens, we want to take our protest to the streets. A week after the first round of the French presidential elections, and just days before the candidates go head to head in the deciding final round, it’s more important than ever stand up and be counted. Against Marine Le Pen! Against the right-wing extremists of the Front National, who are exploiting the current situation in order to spread hatred throughout society and preach their vicious campaign against minorities.

For Europe! Let’s come together and make it clear how much Europe needs France - and France needs Europe.

So be there or be square! Bring your friends and help us stand up for a diverse, open Europe in which solidarity is the order of the day. When, if not now? Who, if not us?

Now is the moment to celebrate these values. It’s up to us!

2016 was a bit of a shit year for politics, wasn’t it? Are you determined not to let the nationalists sweep the floor once again in 2017? Become part of our pro-European campaign and let’s work together to make 2017 a better year for Europe!

We are a platform for pro-Europeans, open to everyone who believes in the importance of a peaceful and united Europe. Now more than ever, we want to stand up passionately for the European project, countering populism and nationalism with a constructive voice that isn’t afraid to speak out about critical issues.

Together, we’re standing up for a diverse and open-minded Europe:
...based on democracy and the rule of law.
...where we live side by side, bound by solidarity.
...guided by the political principles of sustainability and fairness.
...where shared problems are solved by working together.

Now is the Moment to uphold these values. It’s up to us! 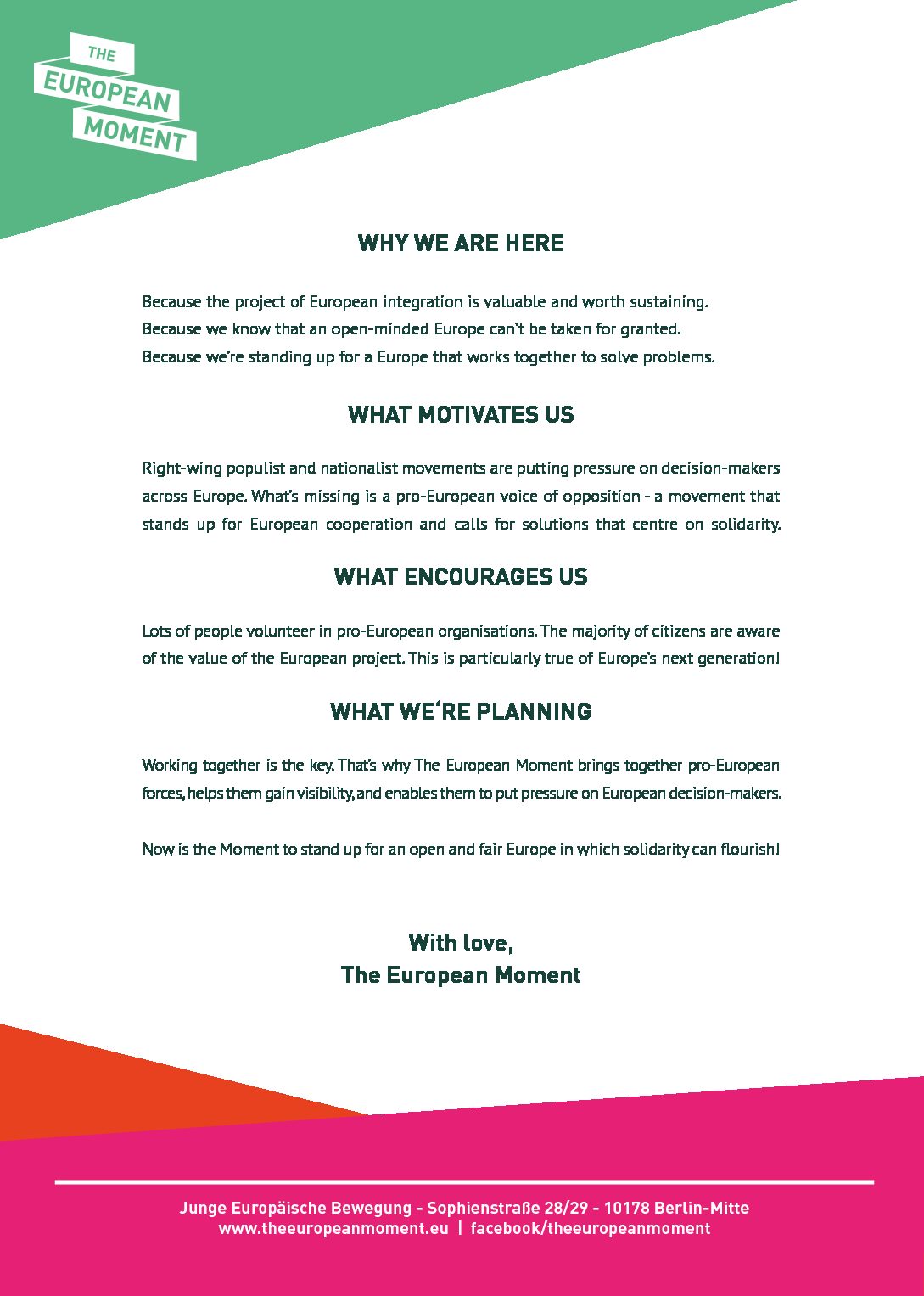 We are calling for:

European decision-makers to take a hard line against renationalisation, populism, and discrimination against minorities.

A common European solution to the challenges posed by migration, and for the humane treatment of refugees.

A few facts about us

Our first pro-European demo in Berlin as part of the March for Europe. 6000 of you came and it was AWESOME!

The European Moment for France

Our second demo: starting at 4pm at Rosa-Luxemburg-Platz in Berlin.

On your bike! For our third pro-European demo, we're doing things a little differently... Come on two wheels and meet us at 7pm at Mariannenplatz on Europe Day!

March For A New Europe

What we’ve achieved so far 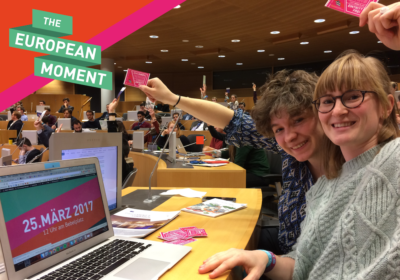 A new European Constitution – a way out of crisis?

What happens when you put 150 different people from youth groups in 38 different countries together in one room for four days? We were faced with a mammoth task: writing […] 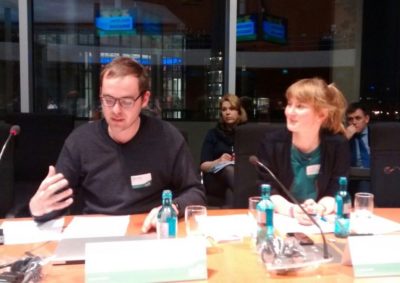 The European Moment meets the Bundestag

This week, the Bundestag representation of the German Green Party invited us along to its event “Yes to Europe – the Courage to Change”. This statement is, of course, a […] 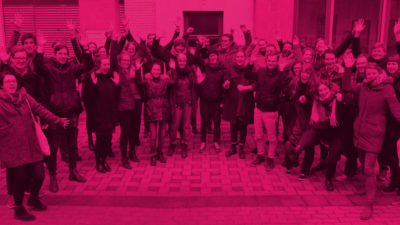 The Moment has come!

Pro-European campaign THE EUROPEAN MOMENT is kicking off with a call to take part in the March for Europe on 25 March in Berlin. Young Europeans are speaking up! — […]

See all our news

Get in touch and become part of our pro-European campaign!

Would you like to write an article about The European Moment?

We'd love to hear from you at presse(at)theeuropeanmoment.eu.

Europe's next generation is speaking up

Let's be activists not statistics